Normally, we’d say restrictions are the basis for some of the best ideas. Having a limited budget or timeframe forces us to be more creative and resourceful, to think more left-field. Indeed, many of our award-winning films have been the more modest productions. Because it’s the idea that counts, the one that resonates and best encapsulates the message.

But this time it’s been different. Sure, we’ve been editing archive footage and recording Zoom calls, (we’ve been using these techniques for years, so it wasn’t a difficult transition) but all of these have their limitations. They serve an interim purpose but there comes a point when audiences crave something different.

So we’ve been planning ahead, trying to anticipate what the “new normal” will look like. None of us know for sure, but we can assume that simple ideas, with a small cast and crew, are going to be much more feasible for the time being.

And we’ve been working hard on producing health and safety guidelines for socially distanced shoots. With the help of policies from BECTU and the APA, we’ve satisfied ourselves we can now get back out there and film safely.

The opportunity came with a brief from The Guardian Service – the UK’s leading provider of independent and confidential staff liaison services, supporting staff at all levels to speak up on workplace issues.  They help organisations of all sizes and their employees navigate together through today’s evolving challenges.  Their insights support leaders to proactively and positively address issues early, benefiting staff relations, performance and finances – and protecting wider reputation.

With a crew of 3 and a cast of 1 we had our first post-lockdown live action shoot, filmed in our office in Covent Garden, where we could control the environment and safety measures.

Unlocking the gate to a building that had been closed for two months felt like a scene from a zombie apocalypse movie. Jackets and sweaters left on the backs of chairs. Unopened drinks cans on desks. Call sheets and scripts waiting to be filed. All very eerie.

The Creative Director had brought along his teenage son (they live in the same house, so didn’t need to socially distance – handy) to help move furniture around, and shortly we had our mini-studio set up in our boardroom. 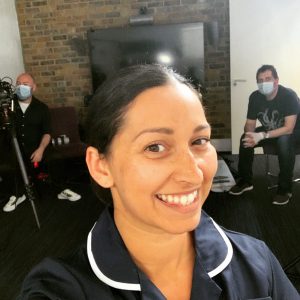 Windows opened, furniture cleared, doors wedged open, separate areas designated for cast and kit, surfaces wiped down, PPE in place. A little later, our Director and DOP, Mark Blackman, showed up with his kit – minimised for portability. After three decades of helping move kit on shoots, it’s hard to resist giving him a hand, but at least we do have a lift. Another hour and our actor, Jade Asha, arrived. She did her own make-up and had brought along her own food and drink. A long boom for sound recording again avoiding any contact with the actor.   Simple things, but important to maintain the two-metre distance.

We’d designed the idea to be as simple as possible. An NHS worker unable to make herself heard. It was all about shooting her performance sensitively.

As Mark says: “The core simplicity of the script – and its main focus being on performance – meant there was little in the way of compromise when it came to setting and capturing the right tone and mood. Sure, the going was certainly slower than we were all used to, but the shooting environment for Jade was quiet, relaxed, and even allowed for improvisation.”

The shoot went like a dream, thanks to a great performance from Jade. All wrapped in just a few hours and then we reverse the process – Jade leaves, Mark wraps his own kit, production sanitises and locks up. Yes it adds a couple of hours to the day, but it’s worth it.

The end result? See for yourself here. Can you tell it was shot under social distancing measures? I doubt it.

The important thing is we’ve proven it’s possible. And as we go on learning best practices on each shoot, we can become more ambitious. With creative thinking and careful planning, we can protect our cast, crew and clients and get back to doing what we love doing. Making films.

It’s good to be back.